Matthew Scott Porter (born 14 July 1979) is an American actor and occasional singer known for his role as Jason Street in Friday Night Lights. His character was injured during a football game in the pilot episode and became disabled.

Porter was paired with Alyson Michalka and Vanessa Hudgens in the 2009 film Bandslam where he performed the song "Pretend", which is featured in the film's official soundtrack. In 2010, he played the role of Blake, a law firm investigator, in The Good Wife.

Due to his role as George Tucker in The CW comedy-drama series Hart of Dixie, Porter was one of various guest stars to appear on Season 11 of the 2015 Whose Line? season. 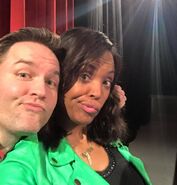 With Aisha Tyler in-between filming his appearance on the show
Add a photo to this gallery
Retrieved from "https://whoselineisitanyway.fandom.com/wiki/Scott_Porter?oldid=31863"
Community content is available under CC-BY-SA unless otherwise noted.