Carlos Irwin Estevez "Charlie" Sheen (born 3 September 1965) is an actor. He is best known for starring in edgy and rather controversial films like Platoon and Wall Street. He has also been in comedies like Ferris Bueller's Day Off, Lucas, and Scary Movie and action/adventure films like The Arrival, Terminal Velocity, Navy SEALS and Machete Kills.

He has co-starred with Whose Line? star Ryan Stiles in many things such as the sitcom Two and a Half Men and the spoof movie series Hot Shots! and has voiced himself on Family Guy. 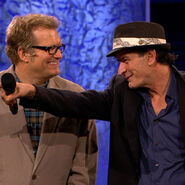 Playing "Story"
Add a photo to this gallery
Retrieved from "https://whoselineisitanyway.fandom.com/wiki/Charlie_Sheen?oldid=31131"
Community content is available under CC-BY-SA unless otherwise noted.